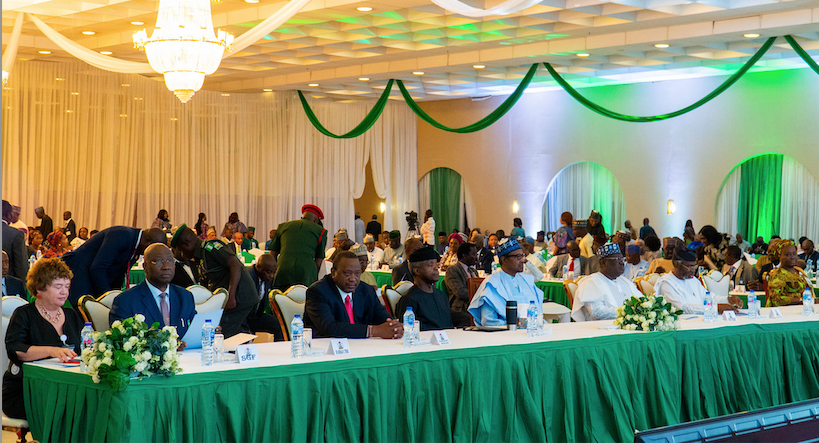 President Muhammadu Buhari has scored his administration high on the implementation of high-impact projects nationwide aimed at satisfying the desires of the people, saying his administration is on track to deliver on its mandates before the end of its tenure in May 2023.

The President made this known in Abuja at the 3rd Year Ministerial Performance Review Retreat with the theme: “Enhancing Security, Fight Corruption Transform the Economy”, organised to evaluate the level of progress made in the implementation of the Nine Priority Areas of the Administration.

On national security, he noted that government had invested substantially in arms, weapons and other critical military hardware, as well as continuous training for the Armed Forces. 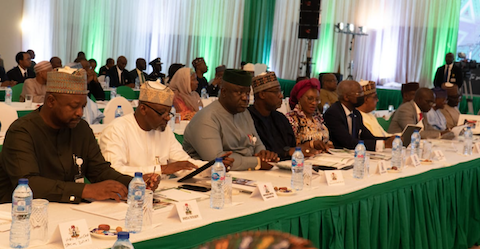 “The Nigerian Air Force has acquired 38 brand-new aircraft and is expecting another batch of 36 new ones, while the Nigerian Navy has been equipped with new platforms, sophisticated riverine, Rigid-Hull Inflatable, Seaward Defence, Whaler & Fast Attack Boats, as well as Helicopters and Capital Ships. To boost the number of our Police personnel, 20,000 policemen have been recruited, trained, fully integrated and deployed in 2020 and 2021. This exercise has strengthened our community policing strategy which is enshrined in the Police Act, 2020", he said. 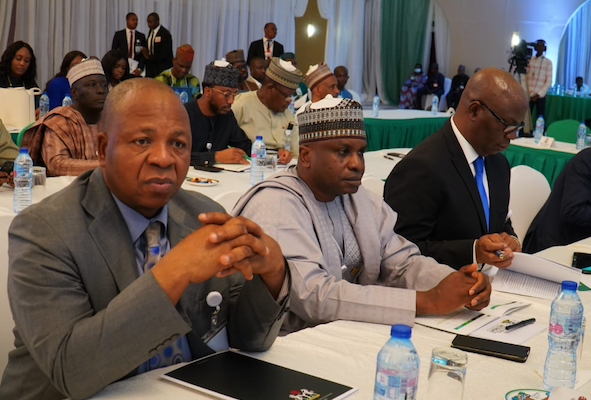 Commenting on the fight against corruption, he assured that government remained unwavering and would continue to prosecute high-profile cases. He added that government had established platforms to promote collaboration among anti-corruption and prosecuting Agencies of Government to ensure transparency in the processes, and speedy completion of cases.

Regarding Social Investment programmes and other socio-economic programmes and policies, he noted that as of June 2022, government had enrolled 75% of the 1 million beneficiaries of Batch C under the N-POWER Programme, while 9,990,862 pupils are being fed through the School Feeding Programme, which employs 128,531 cooks in local communities.

“Following the passage of the National Health Act in 2014, this Administration began the inclusion of the 1% minimum portion of the Consolidated Revenue Fund.”

In order to make quality health care affordable and accessible to all Nigerians, through funding the Consolidated Revenue Fund to cater for the Basic Health Care Provision Fund (BHCPF).

He disclosed that the establishment of a national carrier for Nigeria has reached 91% completion, while flight operations are expected to commence before the end of the year.

On the economy, the President stated that Nigeria has witnessed seven consecutive quarters of growth, after negative growth rates recorded in the 2nd and 3rd Quarters of 2020.

He noted that most sectors of the economy recorded positive growth, reflecting the effective implementation of the economic sustainability measures introduced by this administration.

Regarding the Communications and Digital Economy Sector, the President stated  that giant strides had been made ”through broadband coverage which currently stands at 44.32 per cent reinforced by 77.52 per cent 4G coverage with the establishment of 36,751 4G base stations nationwide.”

On the Power Sector, he said that “the implementation of a ‘Willing Buyer-Willing Seller’ Policy introduced by this Administration has opened up opportunities for increased delivery of electricity to under-served homes and industries.”

He also noted that Government: “is executing a number of critical projects through the Transmission Rehabilitation and Expansion Programme, which will result in achieving the national goal of improved power supply by 2025.”

The President added that the partnership between the Federal Government of Nigeria and German Siemens AG through the Presidential Power Initiative to increase electricity generation to 25,000 Megawatts (MW) in six years was on course, as the first batch of the transformers had arrived Nigeria already.

President Buhari noted that  some of the notable achievements of his government include the completion of 326km Itakpe-Ajaokuta-Warri rail line and railway ancillary facilities; the completion of 156.5km Lagos-Ibadan standard gauge railway modernization project with extension to Lagos Port, Apapa.

“On road projects, this Administration has constructed 408Km of roads; 2,499Km of SUKUK roads and maintenance of 15,961Km of roads across the Country. Key among these projects are the construction of 1.9km 2nd Niger Bridge linking Anambra and Delta States with 10.30km approach road; rehabilitation, construction & expansion of Lagos-Shagamu-Ibadan dual carriageway; the ongoing rehabilitation of Abuja-Kaduna – Zaria - Kano Road, among others.”

According to the President, “We have sustained our commitment to infrastructural development for the past 7 years. This is evident in the handing over of 941km of completed SUKUK road projects nationwide.

“Furthermore, the Federal Government has embarked on the reconstruction of 21 selected Federal Roads totaling 1,804.6km, under the Road Infrastructure Development & Refurbishment Investment Tax Credit Policy. The roads which are funded by the Nigeria National Petroleum Limited are in addition to similar existing collaboration with Messrs. Dangote Industries Limited and other corporate organisations to improve the stock of our road infrastructure.”

President Buhari noted that the Petroleum Industry Act (PIA) which he signed into law on 16th August 2021, provides a legal, governance, regulatory and fiscal framework for the Nigerian Petroleum Industry, as well as the development of host communities and related matters.

He also disclosed that the Agricultural sector had experienced significant growth, as the goal of self-sufficiency in rice production, as well as other staple crops, had been achieved.

President Buhari acknowledged the efforts of the Secretary to the Government of the Federation and his team in sustaining the Annual Performance Review Retreats, which “has enabled us to maintain focus on our Agenda and more importantly, provided solid evidence that supports our achievements.”

He enjoined the Ministers, Permanent Secretaries and all Heads of Agencies to reinvigorate their efforts in boosting delivery of flagship programmes and projects contained in their Ministerial Mandates.

Speaking earlier to set the context for the Retreat, Secretary to the Government of the Federation, Boss Mustapha,CFR, (SGF), said the two-day Retreat had been structured into three main focus areas.

According to him, the first is an overview of ministerial performance within the last three years of the Administration, presenting key achievements and identifying opportunities for improvement. In his words: “The second will reflect on lessons and good practices from the Kenyan Presidential Delivery Unit; and the third will focus on ways to accelerate the delivery of flagship projects and programmes of Mr President  before the end of this administration in May 2023.”

SGF disclosed that at the Retreat, the President would sign an Executive Order on “Improving Performance Management, Coordination and Implementation of Presidential Priorities of the Federal Government of Nigeria; we are making remarkable progress and on track to reach most of the deliverables in the Ministerial Mandates against the targets for 2023.”

He further said no single government can address all the challenges and deliver all democratic dividends, hence the need to focus on critical issues that will impact efficient service delivery and lay a foundation for sustainable national prosperity. He added that the role of Succession and Transition Planning are important for the continuity of Government in all African countries and noted the role of collective efforts of his team to achieve developmental efforts.

In his goodwill message, the All Progressives Congress (APC) Presidential candidate, Asiwaju Bola Ahmed Tinubu applauded President Muhammadu Buhari for his dedication and patriotism in the delivery of his nine point agenda which has turned the fortunes of the nation for good. He promised to build on all legacy projects by providing progressive governance to Nigerians when elected next year.

He said his government will be devoted to continuity, particularly of projects that will bring prosperity to the citizens, while his guiding principle will be hinged on providing the best of progressive governance and reform the nation.

In her goodwill message the British High Commissioner to Nigeria, Catriona Laing, commended the Federal Government for holding the heads of Ministries, Departments Agencies (MDAs) accountable through the Ministerial Performance Retreat thereby inculcating transparency in the execution of government’s policies and programmes.

She urged the Federal Government to ensure the entrenchment of democratic principles in the conduct of the forthcoming general election in order to have a free and credible election as he promised during the 77th United Nations General Assembly.

In his keynote address the immediate past President of Kenya, Mr. Uhuru Kenyatta said that no government can solve all the problems of its people, but what mattered most is the focusing on delivering critical areas that would improve the welfare of the people. He therefore opined that continuity and succession planning should be given high premium in order to build on lasting foundations for posterity.

He also underscored the need for collaboration among government’s agencies in the attainment of government’s policies and programmes.