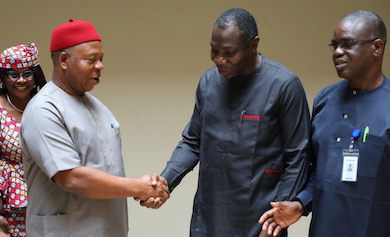 The Federal Government has given the assurance that it would ensure the successful implementation of the Nigeria Digital Identification for Development (ID4D) project for a robust and inclusive national ID system for national development.

The Secretary to the Government of the Federation, Boss Mustapha, made the pledge while receiving in audience the team from the Nigeria Digital Identification for Development (ID4D) Project led by its Project Coordinator, Mr. Musa Odole Solomon, in his office.

SGF, who was represented by the Permanent Secretary, General Services Office, Dr. Nnamdi Maurice Mbaeri assured the team that the SGF would ensure the buy-in of all Ministries, Departments and agencies (MDAs) for the successful execution of the project. In his words: “You would get a high level cooperation of government, especially at the Federal Executive Council level; I would suggest that you put some of these things in writing to formally submit them to SGF to escalate them to the respective critical stakeholders like the National Assembly, FEC and some other relevant MDAs for easy implementation of the project”.

He urged the ID4D to ensure they have a unified identification system that would help to mitigate insecurity, ease of doing business as well as access to social services.

Speaking earlier, the Project Coordinator, Nigeria Digital Identification for Development (ID4D) Project, Mr. Musa Odole Solomon solicited the support of the Office of the Secretary to the Government of the Federation for effective implementation of its activities of all relevant MDAs.

Odole assured the SGF that the project has made adequate provisions for financing institutional capacity development, aimed at building trust and credibility within the country’s ID ecosystem. He added that capacity building would include continuous training, based on skills gap capacity analysis to be conducted under the project.

The Nigeria Digital ID4D is a Nigerian project, jointly funded by the World Bank, European Investment Bank and the French Development Agency with a total project’s value to the tune of Four Hundred and Thirty Million Dollars (USD 430m) within the period of 5 years. It is also mandated to create a robust foundational ID system for Nigeria that would involve NIMC and the Civil Registration system under the National Population Commission (NPC), the project had begun engagement with the NPC for areas of support, including digitizing the registration of births and deaths, capacity building and a review of their legal and institutional frameworks.