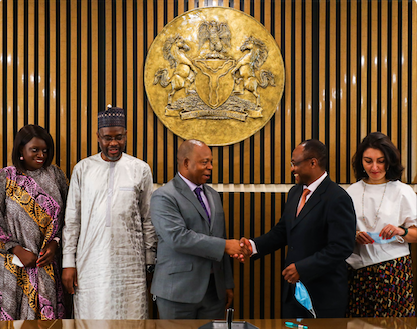 The Federal Government has reiterated its readiness to support the Global Fund in the eradication of AIDS, tuberculosis and malaria in the country.

The pledge was made by the Secretary to the Government of the Federation, Boss Mustapha, when the team of Global Fund to Fight AIDS, Tuberculosis and Malaria, led by its Senior Fund Portfolio Manager (High Impact Africa), Jean-Thomas Nouboussi, paid him a courtesy visit in his office.

SGF, who was represented by the Permanent Secretary, General Services Office, Dr. Nnamdi Maurice Mbaeri said that the Federal Government is committed to supporting the organization toward the attainment of its objectives. In his words:

“Let me respond to the first one first, on the need to remedy the balance of about $2 million. I'm happy you said we are already in touch with the Minister of Finance; shortly after this meeting I am going to brief the SGF when he comes back, and then we will find a way to get in touch with the finance ministry to ensure that we do the needful. So I will also discuss with my colleague, the Permanent Secretary Special Duties who is responsible for these disbursements to be sure that the request is right there on his table and to follow up immediately”.

Speaking earlier, the Senior Fund Portfolio Manager High Impart Africa of The Global Fund, Jean- Thomas Nouboussi, thanked Nigeria for its efforts in mobilizing resources toward the fight against AIDS, tuberculosis and malaria. He requested to the SGF to step up efforts in paying the remaining replenishment commitment and to also increase its contribution to 30 percent as it prepare for its seventh Replenishment in Washington DC.

He said that the organization is working with the Ministry of Health and other donor partners on the mobilization and utilization of funds from governments in alleviating the plight of patients living with AIDS, tuberculosis and malaria.

The Director- General, National Agency for the Control of AIDS (NACA), Dr. Gambo Aliyu said that the purpose of the visit by the Global Fund was to thank the government of Nigeria for its financial support in the fight against AIDS and to also seek for support toward the success of the Seventh Replenishment scheduled to hold in September in New York.

Global Fund is a worldwide movement to defeat HIV, tuberculosis and malaria and ensure a healthier, safer, more equitable future. The organization raises and invests $4 billion a year to fight the deadliest infectious diseases, challenge the injustice that fuels them and strengthen the health systems in more than 100 of the hardest hit countries.