PRESS RELEASE: SGF ASSURES THE PROGRESSIVES UNION OF SUPPORT IN ACHIEVING ITS MANDATE 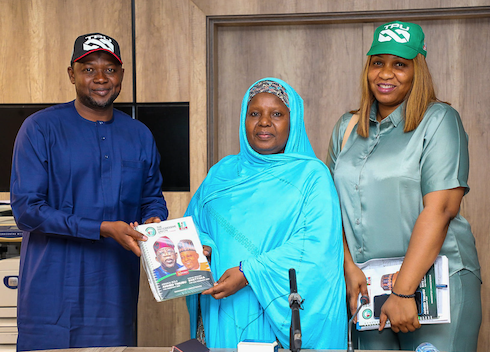 The Secretary to the Government of the Federation, Boss Mustapha, CFR has assured The Progressive Union of its support in ensuring victory for the All Progressives Congress (APC) in the forthcoming 2023 general elections.

He made the pledge when a delegation from The Progressive Union (TPU) led by its President, Hon. Mahmud Awal, paid him a courtesy visit in his office.

SGF, who was represented by the Special Adviser to the President on Policy and Coordination, Dr (Mrs.) Habiba Lawal thanked the Union for its unflinching support toward the victory of the All Progressives Congress (APC) in the last elections and assured them of his collaboration and support to ensure that the party emerge victorious in the forthcoming elections.

He acknowledged the Union’s national spread with presence across the six geopolitical zones of the country. He therefore tasked them to expedite their campaign strategies by engaging on door-to-door mobilisation toward the success of the forthcoming election.

SGF further urged TPU to deliver beyond the Two Million votes being promised for the APC presidential candidate, Asiwaju Ahmed Tinubu in the forthcoming election considering the structures it has in the country.

Speaking earlier, the President of The Progressives Union (TPU), Hon. Mahmud Awal said the essence of the visit was to seek for synergy and collaboration with the Office of the SGF in the actualization of the Tinubu/ Shettima presidential aspiration.

The Progressive Union is a group of young politicians who are committed to ensuring the victory of the All Progressives Congress (APC) across the three tiers of government. It has served at the Party’s Presidential Campaign Council (PCC) in 2015 and 2019. The Union also serves as the vanguard of youth and stakeholders engagement platform for the actualization of the presidential aspiration of Tinubu/ Shettima.