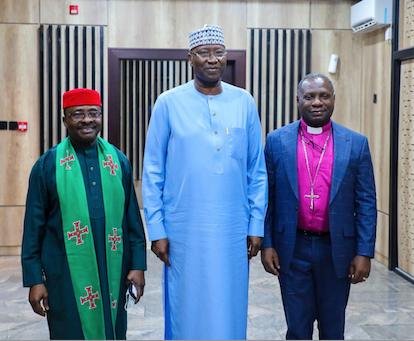 The Secretary to the Government of the Federation, Boss Mustapha, has applauded the outgoing President of the Christian Association of Nigeria (CAN), Rev. Dr. Olasupo Ayokunle, for championing peaceful coexistence in the country while in office. 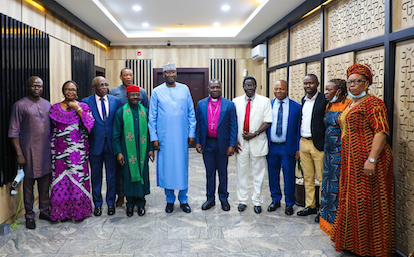 SGF gave the commendation when the leadership of the Christian Association of Nigeria (CAN) led by its outgoing President, his eminence, Rev. Dr. Olasupo Ayokunle paid him a courtesy visit in his office.

Having thanked his eminence, Rev. Dr. Olasupo for his great achievements while piloting the affairs of CAN, also extended the gratitude of President Muhammadu Buhari and the government for his passionate disposition toward ensuring peaceful co-existence while holding sway as the President of CAN and Co-Chair of Nigeria Inter-Religious Council (NIREC). In his words: “Your Excellency on behalf of the President of the Federal Republic of Nigeria, President Muhammadu Buhari, and the government, I want to extend our eternal appreciation for what you have done for the maintenance of peace in this country in the last several years that you have served as CAN President and Co-Chair of NIREC”.

To further buttress on his relentless efforts in the pursuance of peaceful coexistence despite our religious diversity, the SGF said: “It is true when I assumed office, NIREC has ceased to meet for several years, but after I had a discussion with you and also had a discussion with the Sultan, we agreed that whatever bridges that were broken, and the processes of our interaction we became imperative and expedient that the two men religious bodies in this country got back together and began the process of dialogue. And with your support, we are able to rally everybody and we began to hold meetings. The meetings grew in number, it grew leaps and bounds. We traverse the territory of this country meeting from one part of the country to the other. You would not know or quantify what that did to the psyche of the people of this country whenever they saw you on the television conflict infested areas. I remember when we went to Jos, it was at the peak of a very contentious problem but we all came out of jos; and I remember the difficulties you had for us to get you to Jos. Despite of all these difficulties, you never relent in your efforts to ensure the pursuance of peace in this country”.

He further commended his eminence, Rev. Dr. Dasupo for his transparency in the successful reviewing of CAN constitution which has helped in ensuring a rancor-free elections void of litigations that normally ensues after elections were conducted. He added that the reviewed constitution of CAN should also trickle down to the state chapters of the Association so as to have successful elections.

The outgoing President of CAN outline some key achievements he achieved while in office which include reviewing of CAN constitution to accommodate all the blocs, reactivation of NIREC quarterly meetings which helped in dousing religious tension, reviving of Jubilee Resort Centre to yield revenue to CAN, supporting the internally displaced persons across the length and breadth of Nigeria, reviewing of the scheme of service of CAN, amongst others.

In his remarks, the incoming President of Christian Association of Nigeria, CAN, His Eminence, Archbishop Daniel C. Okoh said he would continue on the good foundation laid by his predecessor in ensuring unity and peaceful coexistence in the country. He added that he would encourage inclusivity for all facets.

He added that his administration would strengthen the structure of CAN in such a way that it would engage with successfully with government and other relevant organizations in the attainment of peace and unity in Nigeria.