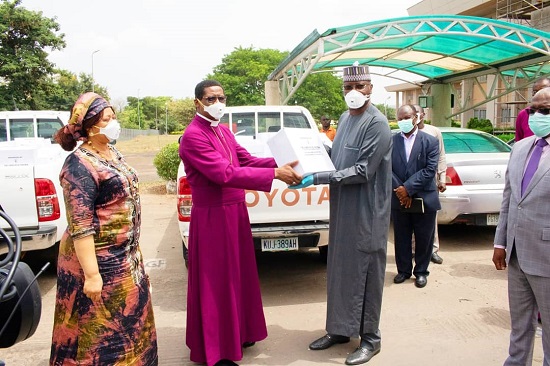 The Church of Nigeria, Anglican Communion has joined hands with the Federal Government to fight the war against COVID-19 pandemic by donating goods worth N10,000,000 (Ten Million Naira) to the PTF.

Receiving the materials, the Secretary to the Government of the Federation, Boss Mustapha, who is also the Chairman of the Presidential Task Force, expressed gratitude to the Church for the donation.

The SGF stated that the donation came at the right time and would go a long way in assisting medical/health workers in the fight against the pandemic.

He noted that the Anglican Communion was among the first to advise its adherents to fully obey all instructions of government with regard to congregational meetings as well as the stay at home order.

In his words: “the Anglican Church is one Church that has already told its members to stay at home so as to overcome the pandemic.”

The SGF commended the efforts of the Church in the provision of palliatives to both its members and others in this period in which Nigerians are in dire straights.

He promised to put in good use the donations made by the Church in the fight against COVID-19 and urged them to continue in the intensification of prayers for the healing of the country.

Speaking earlier, the Primate of all Nigeria, Anglican Communion, His Grace, Most Rev. Henry Ndukuba, CON; Said that the Church is giving support to both the federal and state governments in the fight against COVID-19 pandemic.

The Primate stated that the response of the Church to COVID-19 will be in the following three areas: Spiritual, Physical and Material.

In the spiritual aspect, he stated that the Church will intensify prayers on behalf of the country to ensure the healing of the land. On the physical aspect, he said that he had directed all the Bishops in the dioceses and parishes to build food banks for distribution of food to indigent people. On the material provision, he noted that the support of the Church is in the provision of medical consumables which have been procured and are being released to both federal and state governments.

He informed the PTF that the medical consumables presented to the PTF is worth N10,000,000.00 (Ten Million Naira).