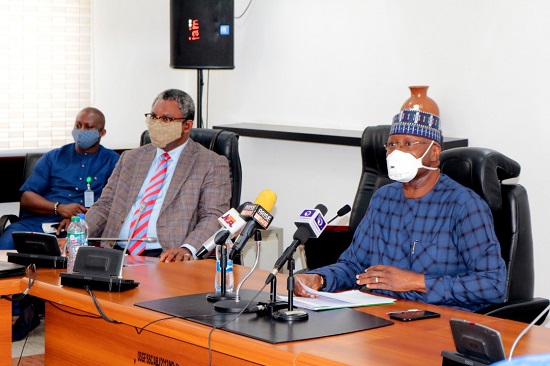 Inaugurating the committee, the Secretary to the Government of the Federation, Boss Mustapha, who also doubles as the Chairman of the Team stated that it was desire of the government to create opportunities for the development of national global capacity, especially, in the area of industrialisation within a diversified economy.

The Chairman noted thus: “The Ajaokuta Steel plant have languished in economic unproductivity for about four decades and previous efforts at reviving it had proved abortive. This has resulted in avoidable massive foreign exchange losses at intolerable opportunity cost to the country. The pressing need to redress these avoidable challenges has necessitated this Presidential intervention at this time. This is further underscored by difficulties being witnessed with present challenges in the global oil industry.

The Chairman stressed the importance of the Ajaokuta steel plant to the country and explained that it presents a unique opportunity to make it to become West Africa’s largest fully integrated producer and most importantly, to accelerate industrialisation in steel related industries. He noted that the government places a lot of value on the diversification of the economy, hence, President Buhari’s participation at the Russia/Africa summit in Sochi, Russia, wherefore, the resuscitation of the Ajaokuta steel plant with its Russian counterpart, President Vladimir Putin.

The Chairman noted thus: “inauguration of the “Ajaokuta Presidential Project and Implementation Team” (APPIT) is therefore meant to kick start the process of re-directing the activities of the Steel Plant with the aim of bringing the Steel Project back to life for the growth and economic development of our dear nation.”

According to the Chairman, the Terms of Reference (TOR) include the following;

i. Engage in all bilateral negotiations as shall be necessary on behalf of the Federal Government of Nigeria leading to the execution of the Government-to-Government Agreement with the Russian Federation and the Afreximbank;

ii. Provide all relevant technical and other inputs necessary to close the Government-to-Government negotiations;

iii. Ensure that the best extreme possible, all relevant raw materials are sourced locally, bearing in mind the local content provisions and the Presidential Executive Order 005;

v. Ensure the resuscitation of Ajaokuta Steel Plant (ASP) based on the original design; and

vi. Ensure timely commissioning of the Ajaokuta Steel Plant (ASP) within a reasonable period to be agreed upon by the parties to the agreement and recommend primary tenure of a Build-Operate-Transfer (BOT) Concession.

The membership of the Ajaokuta Presidential Project Implementation Team (APPIT) include:

i. Secretary to the Government of the Federation: Chairman

Earlier, the Minister for Mines and Steel Development, Olamilekan Adegbite, gave the background to the resuscitation of the Ajaokuta steel project and noted that the series of event has been long in coming but emphasised that “it is better later than never.” Adegbite who is also the Alternate Chairman of the Team, praised the SGF for his hard work in ensuring that the Ajaokuta project sees the light of day.

In a vote of thanks, the Permanent Secretary, Ministry of Mines and Steel Development, Mr. Edet Akpan, expressed appreciation to the President for his interest and support in the resuscitation of the Ajaokuta Steel Project and pledged the readiness of the members of the team to live up to expectation of government in delivering on the project. He noted that when completed the project will lead to the production of tons of millions of liquid steel would be produced to enhance the nation’s economy.