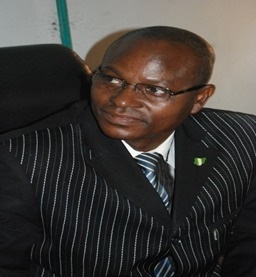 The Permanent Secretary Special Duties Office (SDO), Engr. Festus Yusufu Narai Daudu has assured the management of the various parastatals under the SDO of his unalloyed support and cooperation for the effective performance of their functions.
He made this call during the briefing by the Chief Executives of Nigerian National Merit Awards (NNMA), National Lottery Regulatory Commission (NLRC), and National Commission For Refugees, Migrants and Internally Displaced Persons (NCFRMI).
A number of issues were raised during the presentations by the Chief Executives, the Permanent Secretary then made the following recommendations. For the National Lottery Trust Fund (NLTF), the Permanent Secretary charged the management to explore ways of generating more revenues as it is a money-spinning industry capable of sustaining the national budget of the country, which in the long run will boost the nation’s revenue.
Engr. Daudu called for the revision of the action plans/ road maps of the National Lottery Regulatory Commission (NLRC) and the National Lottery Trust Fund for better regulation of the industry in the area of tax remittances to the Federal Government in order to move the sector forward. In addition to this, he advocated for harmonization of the roles of both agencies to avoid areas of conflict. He decried that the general public is unaware of the existence of both agencies and thus called on the management of both agencies to embark on aggressive media campaigns in order to get the buy-in of the general public. The Chief Executives reeled a number of challenges hindering the performance of their set objectives as office accommodation, inadequate funds, need for the revision of policies in the establishment of the agencies amongst others. The Permanent Secretary promised to work assiduously to tackle the challenges while also calling for team building from the agencies with the Special Duties Office. The Chief Executives congratulated him on his new appointment and also promised to work with him for the overall development of the country. Present at the various briefing sessions, in turn, was the Chief Executive of the National Lottery Trust Fund Alhaji Bello Maigari, Ag. Secretary of NNMA Mr Namadi Ibrahim, Federal Commissioner of National Commission For Refugees, Migrants and Internally Displaced Persons (NCFRMI) Hajia Sadiya Umar Farouq in the company of their management staff.