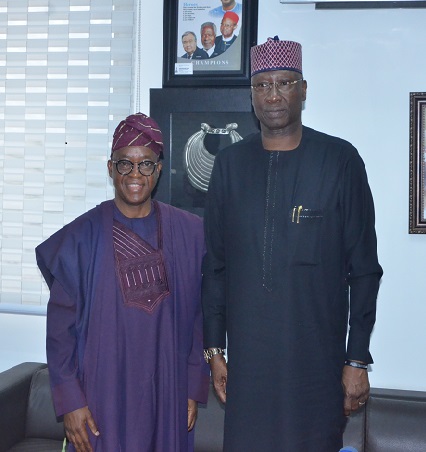 The Secretary to the Government of the Federation, Boss Mustapha, has implored the Governor of the State of Osun, Gboyega Oyetola, to improve on the legacy of his predecessor, Ogbeni Rauf Aregbesola in terms of dividends of democracy to the people of the state.

Mustapha stated this when Oyetola paid him a courtsey call in his Office.

He said that in spite of the enormous challenges faced by the state, the All Progressives Congress’ (APC’s) administration under the immediate past governor, Ogbeni Rauf Aregbesola witnessed tremendous infrastructural development; noting that “the state under Aregbesola, put in place programmes that have direct impact on the lives of people of Osun, which include social investment programme, security of lives and property as well as infrastructural development”.

The SGF therefore called on the new governor to consolidate on the developmental strides by giving priority attention to youth empowerment with the aim to take them away from the streets and to also curb crimes. “Our people rightly deserve the best”, he averred.

He recalled the critical interventions by President Muhammadu Buhari’s government through bail-out funds and the Refund of Paris Club to the state in order to make it stable.

The SGF was not unmindful of the backlog of salaries that the governor inherited and assured him that the Federal Government under President Muhammadu Buhari will do all it takes under the purview of the law to assist the state.

He reiterated the Federal Government adherence to fight corruption, diversification of economy and security of lives and property of all Nigerians.

He enjoined the governor to always embark on policies that will be people oriented; adding that dividend of democracy is essential to President Muhammadu Buhari administration.

Earlier in his remark, the Governor of the State of Osun, Gboyega Oyetola, informed the SGF that his purpose of his visit was to express his gratitude to the Federal Government through the Office of the Secretary to the Government of the Federation for the support he received during his election and also to congratulate President Muhammadu Buhari for his re-election into office for the second tenure.