SGF receives report of the Presidential Fact-Finding Panel on NHIS 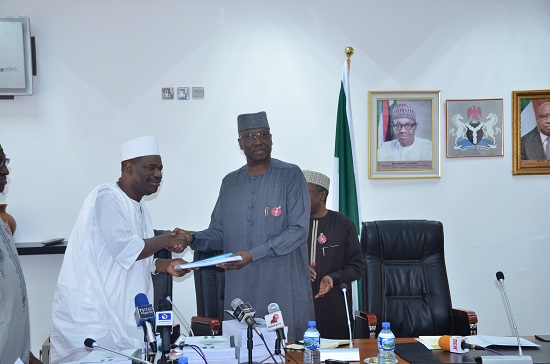 The Secretary to the Government of the Federation Mr. Boss Mustapha has said that Federal Government regards the National Health Insurance Scheme as critical to its promise to Nigerians to enjoy qualitative and affordable healthcare services.

The SGF said this during the presentation of the Report of the Presidential Independent Fact-Finding Panel on National Health Insurance Scheme (PIFFP-NHIS) in his office.

“Government also regards healthcare delivery as a cardinal programme on which huge investments have been committed because a healthy nation is a wealthy nation” he emphasized.

Furthermore, in his address, the SGF reiterated that the Federal government approved the constitution and inauguration of Boards and Governing Councils and its Parastatals in March, 2018; and emphasized on key areas on the powers and responsibilities of the Boards as well as harping on the essence of good working relationship between the Boards and the Management while ensuring that the day- to- day operations were not interfered with.

In addition, the SGF said that in order to bring new Board members and their Chief Executives up to speed on current policies and programmes of government as well as legislations guiding ways of conducting government business, broad-based induction courses were organised and over 60 Agencies in four batches have benefited from such induction courses including the NHIS.

However, the SGF regrets that despite these efforts by the federal government, different scales of skirmishes erupted from Board rooms into public domain, and with particular reference to the situation at the National Health Insurance Scheme.

Given the foregoing, nevertheless, Mustapha recapped that President Buhari on the recommendation of the OSGF approved the constitution of 7 member Presidential Independent Fact-Finding Panel headed by Dr. Bukar Hassan, a retired Permanent Secretary to look at the immediate and remote causes of the conflict that engulfed the Scheme.

Boss Mustapha restated that the Panel was inaugurated with a 5 point Terms of Reference including the responsibility for examining all governance issues challenging the Scheme. He further assured that the decision of government on the recommendations of the Panel will be made public at the appropriate time.

The Chairman of the Panel, Dr. Bukar Hassan expressed his gratitude on behalf of the members of the Panel, thanking President Buhari and the SGF for the opportunity and confidence reposed on them to serve government in the capacity.

He said the panel had to request for additional time due to quantum of the documents it had to go through and to interface with stakeholders for transparency and fairness. Accordingly, he believed that the panel’s report will go a long way in repositioning the scheme and achieving the laudable objectives for which it was established.